The Adventures of Little Billy “In Search of the Magic Tree” - ... 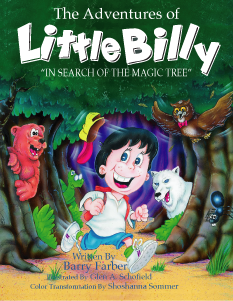 About The Adventures of Little Billy: IN SEARCH OF THE MAGIC TREE

In The Adventures of Little Billy, “In Search of the Magic Tree,” best-selling business and leadership book author Barry Farber captures so many traits that highly successful leaders have, told through a wonderful children’s story. Within the story, the secrets that little Billy discovers on his adventure seem like common sense to most. But, in truth, offer up valuable life lessons for children on how they can create more meaningful friendships, deeper happiness and be on the path to greater success.

The story has five key animals who all interact with Billy on his journey to find the Magic Tree. Each of the animals have been given the essential secrets of the key chapters in Farber’s Diamond in the Rough, his best-selling business book that incorporates five traits of highly successful leaders. “I believe that it’s never too early for kids to learn and understand important life values and traits on how they can be happier and more successful as they grow and mature. This book is all about giving them something fun to read, while providing strong values parents will appreciate,” said Farber. “For example, from the beginning, Lawrence the Owl speaks to helping all the animals regardless of who they are and Ruppert the Toad emphasizes that Billy needs to look on the inside of those he sees.”

The Adventures of Little Billy is set to become an animated series and will be developed to be a television story soon. With that, Farber has brought in known celebrities to play each character based on how each is viewed in society. Sherman the Turtle will be played by Ottis Jerome “O.J.” Anderson, The Amazing Kreskin is set to play The Magic Tree and Bobby Collins will take on the role of Bosco the Bear. And starring in the role of Little Billy is Eden Kontesz, who at only 10 years-old, has already made a name for herself singing and acting in TV shows such as The Simpsons and Transparent.

The Adventures of Little Billy was illustrated by Glen A Schofield. Color transformation was done by Shoshanna Sommer. Barry Farber is a best-selling author of 14 business and inspirational books in over 30 languages. Farber is also an award-winning radio and television host, as well as an agent and marketing consultant for corporations, professional athletes and entertainers. Learn more about Farber at www.barryfarber.com